Start typing a product name or number, as an example, Mindset or Brain 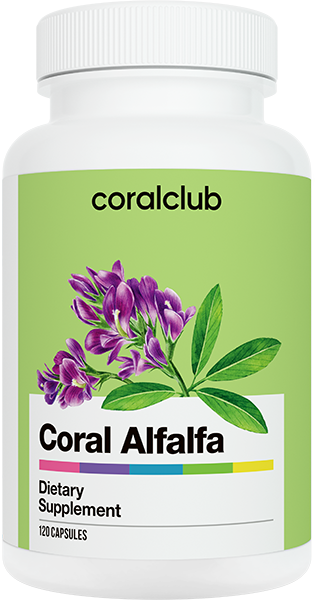 Coral Alfalfa is a dietary supplement based on the leaf and concentrated juice of the alfalfa plant. Alfalfa is a plant source of several kinds of amino acids, vitamins A, B group, E, K, minerals (such as calcium, iron, potassium, and magnesium), chlorophyll, saponins, anthocyanins, flavonoids, and isoflavones. This plant is also one of the few that contains vitamin D and fluoride. In folk medicine, it is considered a plant that cleans the blood from toxins. In Tibetan medicine, it is prescribed as an anti-inflammatory agent. Alfalfa has long been used in herbal combinations to promote the recovery, cleansing, and rejuvenation of the human body.

Alfalfa herb is rich in protein and vitamins K, C, A, and Folate. It is a nutritious whole food, packed with antioxidants and minerals including Calcium, Magnesium, and Iron. Several studies showed that Alfalfa could lower blood cholesterol level. It is also a popular tonic for flushing the body of toxins.

This product is not intended to diagnose, treat, cure, or prevent any disease

Products related to this item

Chlorella is a unique antioxidant especially beneficial to those who work in industries wrought with health risks, urban dwellers and those ...
180 Tablets
Chlorella Tablets
180 Tablets
21.36 - 26.71 EUR

Thank you, your message has been sent!